Manresa Retreat House itself and a number of sites at Manresa are named for important places in the life of St. Ignatius, the founder of the Jesuits.

At the time of Ignatius, when a man was about to dedicate himself to knightly service,  it was the custom for him to confess his sins and to spend a night in a Vigil of Arms, staying awake in chapel standing and kneeling all night long. Once Ignatius had decided to set aside his past and dedicate himself entirely to God, he went from Loyola Castle across the north of Spain to the Monastery of Montserrat about 40 miles west of Barcelona, there to confess, lay his sword before the ancient image of Our Lady of Montserrat, and keep vigil through the night.

In a small prayer chapel here, we have a full-size image of Our Lady of Montserrat. Before it lies a sword, symbolic of the life Ignatius gave up. For many of our retreatants it has also become a symbol of some element of their own lives that they choose to leave behind.

It was the intention of Ignatius after leaving Montserrat to go to the Holy Land “to help souls.” But the port of Barcelona from which he would have had to sail was plague-ridden, and he was not permitted to enter the city. He stayed instead for the next ten months at the small town of Manresa, about ten miles from Montserrat. It was probably called Minorisa under the Romans. He kept a record of his spiritual experiences there for the sake of helping others, and these notes grew into what is known today as The Spiritual Exercises, the basis of the Catholic retreat movement and of all kinds of retreats given here and at retreat houses around the world. For that reason we and many of those houses are named for this once small city that has since grown to a population of some 40,000. 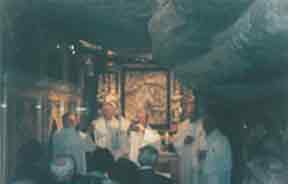 Just outside the town of Manresa there was a small cave, a place of solitude, to which Ignatius resorted throughout these months, praying, and fasting and experiencing God in a personal and transforming way. The cave, once decorated with bronze, stained glass and marble, is being restored more to its original condition, and a Jesuit retreat house is built there adjacent to and over the site. A number of pilgrimages led by our staff have had the privilege of celebrating Mass in the tiny cave. On the second floor of our main house, there is a small prayer chapel, popular with retreatants, called the Cave Chapel in remembrance of this other cave at the original Manresa.

In 1537, on his way to Rome, just a few miles outside the city itself, Ignatius stopped to pray at a small deserted chapel at a place called La Storta. The name means “the twist” and it is called that because it is located at a significant turn in the road. In a vision there that was a watershed in his life he saw God the Father placing him with Christ, and he heard Christ telling him that he would be favorable to Ignatius and his companions in the Holy City. A former gatekeeper’s house at the back entrance to our property is called La Storta in memory of this key point in Ignatius’s life.