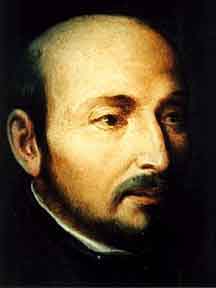 St. Ignatius was born in the Basque area of Spain in 1491. In his early life he pursued a worldly career as a courtier and soldier. At the age of 30 in a battle against the French at Pamplona he was struck down by a cannon ball. Both legs were wounded. During a long period of recuperation he had no books to read except a life of Christ and a collection of the lives of the saints.

God inspired him to follow their example. He traveled to Montserrat, a Benedictine monastery west of Barcelona, and there committed himself to follow a new kind of life. His conversion was deepened through a ten-month stay at Manresa, a town about ten miles from Montserrat, where God spoke to him powerfully.

Ignatius greatly desired to share this experience of God with others. But in those days it was dangerous for an unschooled layman to teach publicly about religious matters. He had to go back to school at the age of 30 and become a priest. He went to the University of Paris. There he found companions, among them Francis Xavier, who was to become a renown Jesuit missionary to the East. 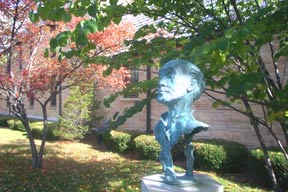 Later these companions, now a group of nine, decided to offer themselves to the Pope for whatever ministry he wanted them to undertake. They came to realize that God was calling them to form a new type of religious order to be sent, on a moment’s notice, to any part of the world where the need was greatest. Ignatius was elected the head of this new religious order which was called the Society of Jesus or the Jesuits. Ignatius oversaw the drafting of the Constitutions for the Society which expanded to 1,000 men by the time of his death in 1556. Ignatius and his experiences and the Ignatian spirituality deriving from them are the foundation on which the Jesuits and this retreat house and our work are based.