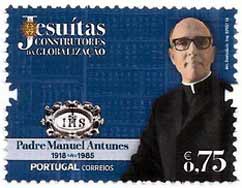 A notable figure of more recent times is Father Manuel Antunes, director of Broteria and professor at the School of Humanities of the University of Lisbon, whose extraordinary classes were attended by thousands of students over the years. Considered one of the foremost Portuguese thinkers of the 20th century, he left behind a vast and varied body of work, which was recently collected and published in 14 volumes by the Gulbenkian Foundation. In his essays, he debated with great contemporary thinkers, modernizing the language of culture in a manner that was both clear and profound. After the 1974 revolution, his book Repensar Portugal (Rethinking Portugal) made him an educator for the new Portuguese democracy.  He and four other figures are highlighted in this special issue entitled Jesuits, Builders of Globalization: Father Antonio Vieira, St. Francis Xavier, Saint John de Brito, and Father Luis Archer. More