PORTUGUESE INDIA, 1946, the tercentenary de Brito's birth, Scott 467
surcharged as a postage due stamp in 1951, Scott J43-44
(design based on a drawing of Albert Sousa)

John de Brito was of Portuguese nobility and the son of a governor of Brazil. He entered the Jesuits in Lisbon in 1662, was ordained in 1673, and left that year for the mission in India. He worked mostly in Madura. At the time Christians belonged mostly to the lower castes. John aimed at converting the higher castes, the better to establish Christianity in the region, and to do so he became a pandaraswami, an Indian ascetic, who could approach all castes. He adopted the appropriate dress and life style of such an ascetic, one of the first of the Jesuits missionaries to do so. One of his converts, Prince Tadaya Theva, upon becoming Christian put aside all his wives except one. One of the rejected wives complained to her uncle, the Raja of Marava who had Brito executed.

The above stamp was from this 1946 PORTUGUESE INDIA mini-sheet with both de Brito and Xavier, Scott 471a

The stamp also appeared on a series of postal cards with variously colored cachets,
featuring the Fortaleza de Diu, the Pagoda de Queula, the Se de Diu, Quebra-mar de Mormugão, Zatrá de Amonã,
the tomb of Xavier (above) or the interior of the Bom Gesu Church, H&G 42-43

PORTUGAL, 1948, the tercentenary de Brito's birth, Scott 689-692
The relief of him as a page at Lisbon is from a Barata Feyo bas relief based on a painting by Henrico Franco;
the image of him as an apostle in Madura is based on another bas relief of Feyo. 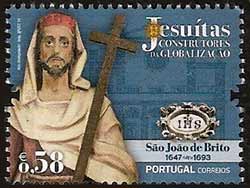