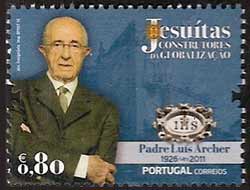 Father Luís Archer, director of Broterio and professor at the School of Science and Technology of the New University of Lisbon, was a leading figure in Portuguese science. He was a pioneer in the teaching and research of molecular genetics and genetic engineering. He set up and directed the first Gutbenkian Laboratory in this field, having educated generations of scientists. He chaired the National Ethics Committee for several years and wrote notable works on bioethics. His complete works are being published by the Gulbenkian Foundation. He and four other figures are highlighted in this special issue entitled Jesuits, Builders of Globalization: Father Antonio Vieira, St. Francis Xavier, Saint John de Brito, and Father Manuel Antunes. More