BRAZIL, 1940-141, Scott 505 and 507A have different watermarks.
This is based on a portrait in the Gabinete Português de Leìtura in Bahia.

Vieira, born in Lisbon, but brought as a child to Brazil, lived an extraordinary life in both politics and religion, and was one of both Brazil's and Portugal's greatest figures in the seventeenth century. He studied with the Jesuits in Brazil and entered the Order in 1623. He taught rhetoric and was widely admired for his eloquence. Once on a trip to Portugal, his abilities were discerned by King John IV who made him tutor to the Infante, court preacher and a member of the Royal Council, and gave him a variety of offices and missions which he fulfilled in exemplary manner. Under John's successor, though, he was silenced by the Inquisition and imprisoned for two years. At home with the rich and powerful, he used his talents and influence in the Old and New Worlds to speak up for the poor, slaves, and oppressed, and continued to do so into old age, despite opposition from all sides. The University of Lisbon, under the direction of José Eduardo Franco, director of the university's Lusofone Centre for Literature and Culture, has recently published the complete works of Antonio Vieira, about 5,000 pages in 30 volumes. More

PORTUGAL, 2008, the 4th centenary of Vieira's birth, Scott 2983
In the horizontal boundary between stamps, one of the perforations is in the shape of a cross. 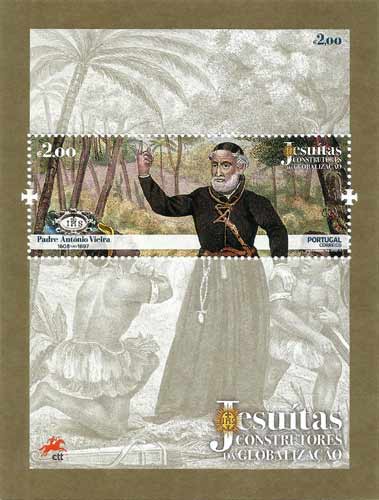 The arrival of the Society of Jesus in Portugal in 1540 was one of the most significant events in Portuguese culture. Parallel to world-wide mission efforts, the Jesuits in just a few decades created a network of secondary education institutions (colleges) and universities.  They established the second Portuguese university, in Evora in 1659, and created the first education network in Portuguese history, based on a new teaching methodology and with links to learning institutions governed along the same lines in various parts of the world. The Jesuit colleges in Portugal, numbering thirty by the time the Society was expelled by the Marquis of Pombal, were spread across the major Portuguese cities, including Madeira, the Azores and overseas Portuguese territories. After the Suppression the Society's commitment to education, culture, and science continued to leave its mark on Portuguese history.  They had a significant influence on Portuguese culture and society, educating figures who would leave behind significant works in various fields and help mold a true Portuguese identity. Antonio Vieira and four other figures are highlighted in this special issue entitled Jesuits: Builders of Globalization: St. Francis Xavier, Saint John de Brito, Father Manuel Antunes, and Father Luis Archer.

PORTUGAL, 1948, a series of 26 postal cards honoring various writers of Portuguese prose was issued
in an envelope (pictured above left) all bearing the image of Vieira because of his preeminence in Portuguese prose;
cards 15 and 16 contain quotations from his works.

PORTUGAL, 1969-70 special show cancels for Philatelic Expositions at Liceu Padre António Vieira in Lisbon
named in honor of the Jesuit though it is not a Jesuit school.